The medial tibial stress syndrome (MTSS) is an overuse injury of the lower leg that is common in runners, soldiers and people who play sports that involve repetitive jumping. Approximately 15% of all running injuries are MTSS. The term 'shin splints' was used in the past to describe every form of pain after exertion. As not much is known about what shin splints are exactly, (para)medical practitioners nowadays use the term medial tibial stress syndrome. 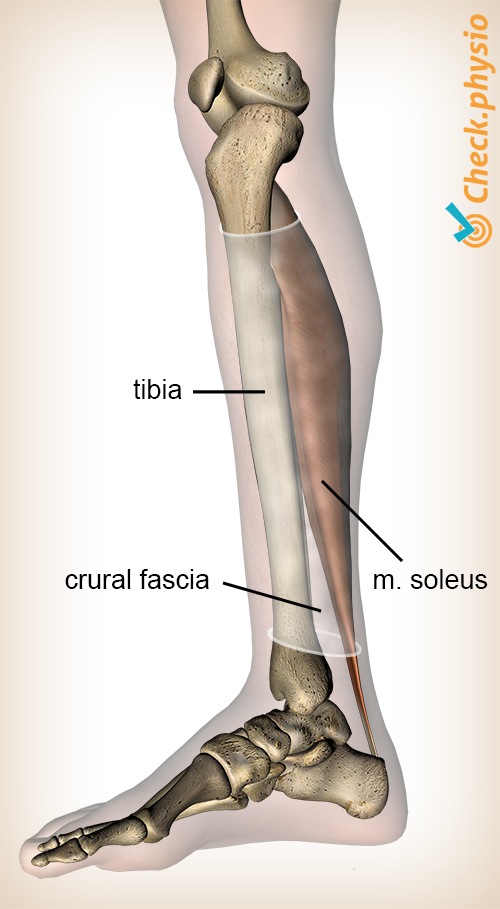 Women have greater risk of MTSS than men. In addition, various studies have also demonstrated that the position of the feet can play an important role.

In the case of medial tibial stress syndrome, the muscle located behind the shin bone and the calf bone plays an important role. This muscle is called the soleus muscle and in the case of MTSS it causes excessive tractive forces on the inner-rear side of the shin bone via the fascia cruris. This causes small bone deformities on this shin bone, which result in pain.

We used to think that the symptoms were caused by an inflammation of the periosteum surrounding the bone. However, research into this - involving three phase bone scans or biopsy - did not reveal any inflammatory process.

MTSS is particularly common in sports that involve frequent and explosive flexing of the m. soleus, such as running. The symptoms develop gradually and can initially disappear during the activity and then return at the end of the training. The pain generally disappears in rest.

The medial tibial stress syndrome can have various causes:

The fact that overpronation can cause MTSS is easy to explain. The 'flopping' of the foot causes an eccentric contraction of the m. soleus. This means that the muscle is stretched from the heel, exerting extra tractive forces on the fascia cruris and the shin bone.

The pain is located in the lower two thirds of the lower leg, on the inside of the shin bone. The patient complains of diffuse, nagging pain whilst running/walking or during sports that involve a lot of jumping.

The diagnosis is made based on the patient's story, pressure pain on the inner edge of the shin bone and a number of physiotherapeutic tests. The pain can often be provoked by standing on one leg and fully lifting up onto the toes or asking the patient to hop on one leg. Optionally, the MTSS can be imaged by means of MRI or a bone scan.