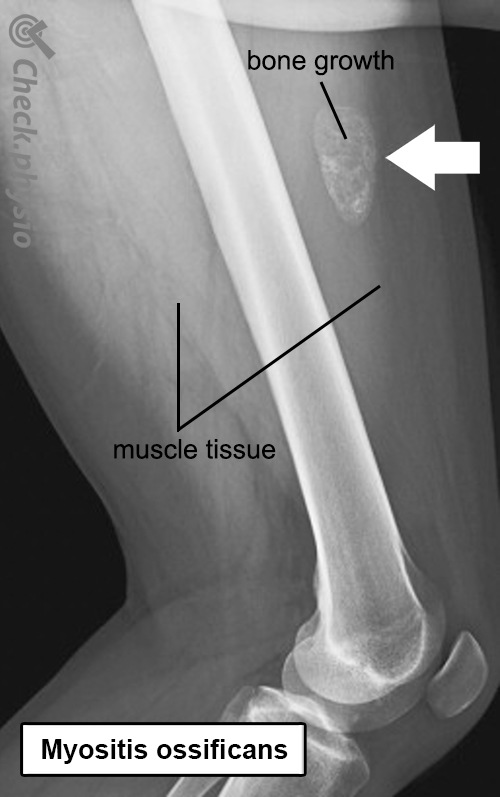 Myositis ossificans can occur in any muscle, but it is most commonly seen in the thigh area after falling on it or for instance after getting a kick to the thigh. It is therefore relatively common in people who play contact sports.

Myositis ossificans is a disorder in which a muscle contusion results in the local formation of bone tissue in that muscle. After having suffered a (severe) contusion, a haematoma develops in the muscle. The body responds to this by initiating an inflammatory reaction in the muscle (myositis). This can cause warmth, redness, pain and swelling. This inflammatory reaction makes sure that the recovery process starts and the haematoma is eliminated. Most of the time, this happens quite fast and the complaints dissipate in a few weeks. But this is not the case for myositis ossificans. The haematoma calcifies and a small piece of bone forms. This process is referred to as ossification.

In principle, the disorder can develop in everyone and at any age. However, myositis ossificans is seen the most in young men between the ages of 20-30 who play contact sports.

Bone usually forms in the muscles after a muscle contusion as a result of contact trauma. This can happen for instance on the soccer field when getting a ‘knee’ to the thigh. However, there is also a more rare cause of myositis ossificans. This can actually also develop in someone who has difficulty moving. For example, due to a coma or paralysis of a body part.

Most of the time, a muscle contusion heals relatively quickly and without problems. However, something particular happens in case of myositis ossificans. The resulting haematoma gradually converts to bone tissue. This process starts about a week after the muscle contusion and finishes six to seven weeks later. The cause of this disorder is unknown and the severity of the complaints can vary greatly, depending on the location and size of the injury.

Even though the cause is unknown, there are a number of factors that increase the risk of developing myositis ossificans. The likelihood increases as the contusion is more severe and the mobility of the joint, where the muscle runs across, is strongly reduced. Massage and heat immediately after the injury can stimulate bone formation as well. It is unknown why some people do and others do not develop this disorder.

The doctor or physiotherapist will ask about the problem. In case of myositis ossificans, the symptoms usually arise after a muscle contusion that does not improve within two weeks. On physical examination, a hard painful lump can be felt in the muscle and the mobility of the joint(s) where the muscle runs across is reduced. At an early stage, an X-ray shows no abnormalities yet, but the disorder does become visible after three to four weeks. An ultrasound shows the disorder at a somewhat earlier stage.

When it appears to be myositis ossificans, only little can be done to promote the recovery. It’s a disorder that generally disappears spontaneously. The body does need some time to break down the newly formed excess bone. This process starts about six to eight weeks after the muscle contusion.

The progression is slow and can take months or up to a year. In other words, treatment consists mostly of rest and patience. A small portion of the bone tissue may stay behind in the muscle. Luckily, this does not necessarily cause permanent complaints.

In order to keep joints and muscles of the affected body part flexible, it is advised to do easy mobility exercises and stay within the pain threshold. Massage, stretching exercises and intensive activities are advised against. 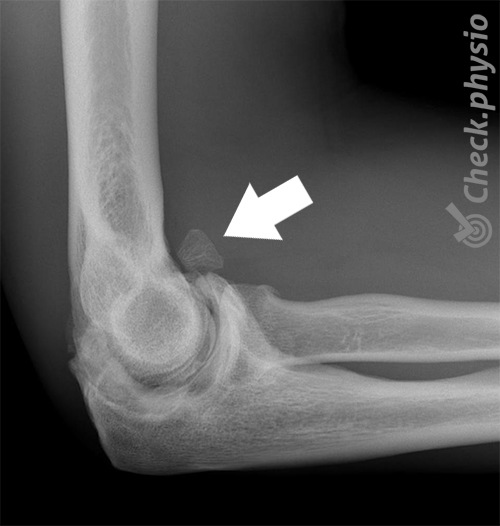