The lower leg is divided into different compartments, which are muscle groups surrounded by a rigid capsule. When the pressure within a compartment becomes too high, this is referred to as compartment syndrome. 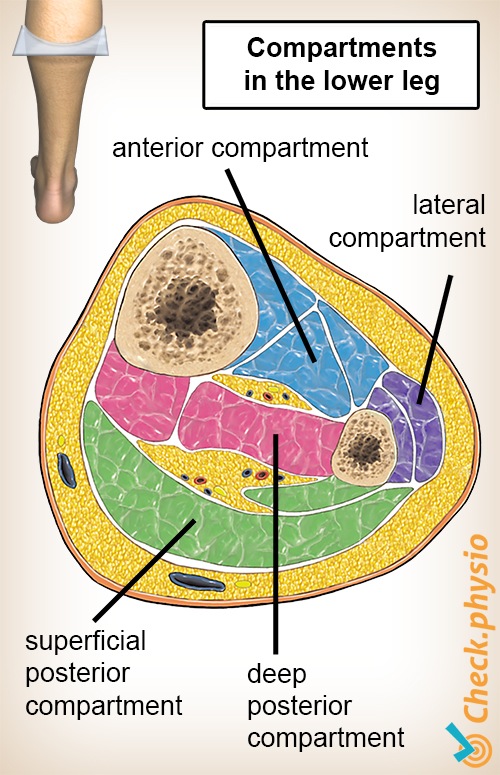 Compartments can be found all over the body, but the ones in the lower leg are the most frequent cause of complaints.

The muscles of the lower leg are surrounded by a rigid capsule, also called fascia. A muscle or muscle group with accompanying fascia is called a compartment. Besides muscles, these compartments also contain blood vessels and nerves.

As a result of a disruption of the blood flow and nerve supply within a compartment, symptoms are experienced in particular during and immediately after exertion. A distinction is made between an acute- and a chronic compartment syndrome.

There are four compartments in the lower leg, each containing two or more muscles. These muscles ensure the movement of the ankle and foot. The compartment located on the antero-lateral side of the lower leg causes the most problems.

In compartment syndrome, the pressure in the compartment increases to such an extent that it causes symptoms. This increase in pressure hinders blood flow and prevents the muscles from functioning properly.

Usually, these complaints occur in people who run, skate or walk. It often involves people who suddenly have to walk much more than before, such as recruits in the army. As a result, the muscle can swell to the extent that further exercise is not possible because of the pain.

The symptoms have often been present for a long time, sometimes for years, and can occur in both legs at the same time. This is referred to as chronic compartment syndrome. People with type 2 diabetes, venous insufficiency or sagging feet (overpronation) may be at greater risk for this condition.

When a compartment syndrome develops after, for example, a bone fracture or ruptured blood vessel, this is referred to as an acute compartment syndrome. Several compartments are often affected at the same time and should be treated in the hospital immediately, as there is a risk of necrosis.

People who suffer from chronic compartment syndrome suffer from pain and tension of the lower leg that occurs every time during and/or immediately after exertion. They have to stop their activity and get rest to allow the symptoms to disappear. There are usually few symptoms at rest. In addition, there may be tingling or numbness of the foot.

The diagnosis is usually made by the physiotherapist or doctor on the basis of the patient's story and physical examination. If there are still doubts about the diagnosis or if the severity of the condition needs to be investigated, the pressure of the compartments can be measured. This examination involves puncturing the compartment with a thin needle and injecting some fluid in order to measure the pressure. This is done both at rest and after exertion in order to show the difference in pressure.

The non-surgical (conservative) treatment can consist of correcting the misalignment of the foot by means of an insole and teaching a different walking technique that relieves the affected compartment more. In addition, a period of (relative) rest will reduce the symptoms, after which the weight-bearing can be gradually built up again.

Surgery will be performed if the pressure reading is too high or if previous conservative treatment did not yield satisfactory results. In this operation, the fascia is opened up to reduce the pressure within the compartment.

After surgery, the wound will take 1 to 2 weeks to heal. The first few days the leg will be wrapped in a dressing and you will have to use crutches until full weight-bearing of the leg is possible again. It is important to start moving again as soon as possible, but intensive sports are not recommended in the first few weeks. After that, the weight-bearing will gradually be built up again. Recovery takes 6 to 12 weeks.

An acute compartment syndrome following, for example, a haemorrhage will always require surgery to prevent necrosis due to a lack of blood flow. 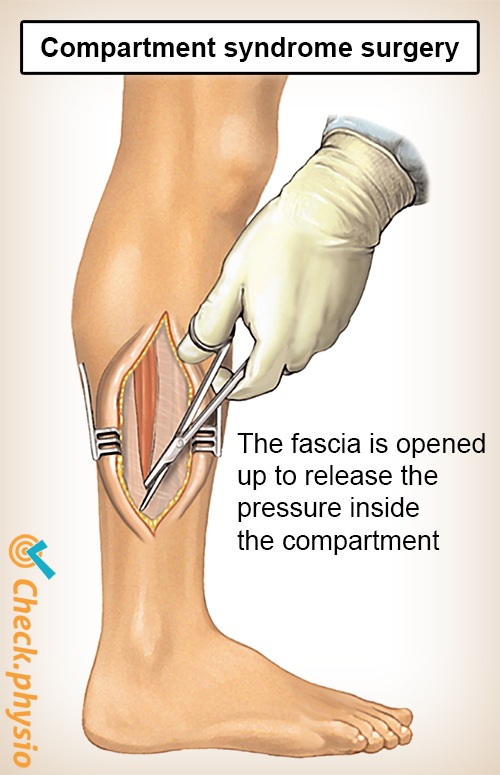