Hoffitis is the name given to swelling and/or irritation of Hoffa’s fat pad. This fat pad is located at the front of the knee, behind the patellar tendon that runs down to the lower leg. 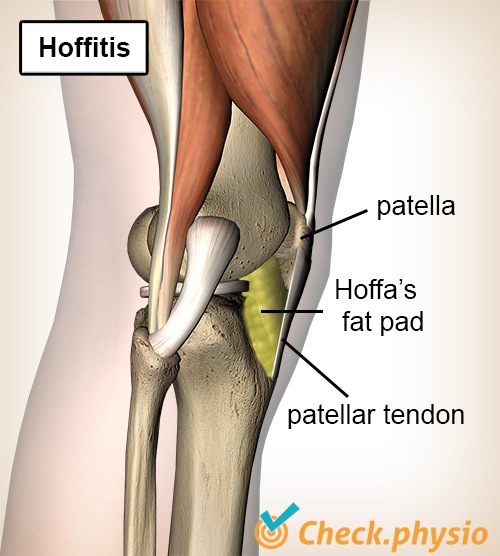 Typical symptoms of hoffitis are local swelling and pain under the kneecap. The condition can occur either acutely or over a long period of time.

Named after the discoverer of this knee structure, Hoffa's fat pad is a deposit of fat that fills the space behind the patellar tendon. This fat pad helps nourish and lubricate the knee joint and contains cells important in inflammatory processes of the knee. It is also assumed to act as a shock absorber for the knee.

This fat pad can cause problems if it becomes wedged between the bones during extension of the knee. The fat pad then becomes irritated and swollen. The latter can be seen in the form of bumps on either side of the patellar tendon. This is known as hoffitis.

Hoffitis can occur acutely, for example, due to a fall or as a result of another knee problem. A more gradual development of the symptoms is also possible. In the latter case, there is chronic (long-term) irritation which, at any point, causes (more) complaints.

People who hyperextend their knee frequently run a greater risk of developing this condition. This is because the fat pad has less room and can become wedged. Hoffitis is relatively common, especially in combination with flat feet, in people who run or walk regularly.

Hoffitis is accompanied by the following symptoms:

The diagnosis of hoffitis is usually made by a (general) practitioner or physiotherapist. A physical examination will follow based on the complaints and the way in which they arose. In this context, swelling in the area of the patellar tendon is examined. A special test, in which the Hoffa’s fat pad is put under pressure, will inquire about recognisable pain.

In case of acute complaints, another knee problem must be ruled out as a possible cause. This can be achieved by additional testing, such as an MRI. This will also show the fat pad.

Because the fat pad is well supplied with blood, hoffitis generally recovers well. It is important to find out what caused the complaints and what factors continue these complaints. Taking sufficient rest and preventing hyperextending of the knee is sufficient in most cases.

It can be useful to have a good look at your gait pattern. If necessary, the fitting of insoles or heel lifts may help prevent hyperextending of the knee.

If hoffitis is the result of another underlying knee problem, this should be resolved first. In such cases, hoffitis often disappears by itself.

In some cases, hoffitis does not heal. In that case, the part of the fat pad causing complaints can be surgically removed.