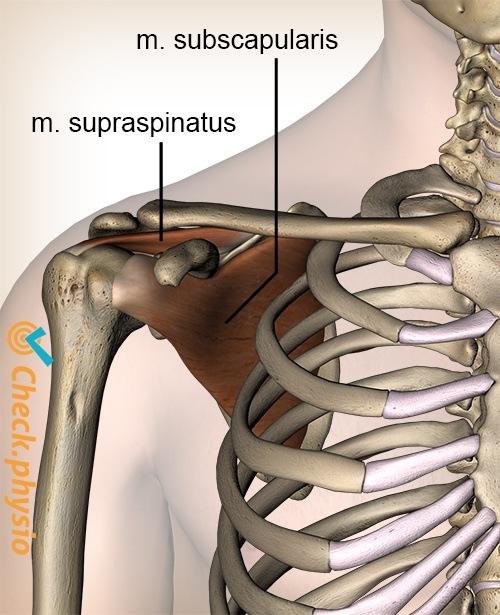 The condition produces symptoms along the front of the shoulder or in the armpit.

Subscapularis injury can result in impingement syndrome, with the head of the humerus becoming impinged under the roof of the shoulder structure.

Symptoms can occur as a result of overloading, incorrect use or degeneration of the tendon. A complete muscle or tendon rupture is only seen after an accident or fall and is more common in older patients.

The patient will complain about pain along the front of the shoulder (or in the armpit) and will struggle to lift objects in front of the chest. Movements that require inward rotation of the upper arm (inward rotation) will also result in symptoms. For example, the patient will struggle to place his hand on his back and then move the hand away from the back from this position. External rotation (outward rotation) of the upper arm can also produce pain symptoms in the final position, because the muscle and tendon are completely extended in this position.

The diagnosis is made following a number of physiotherapeutic tests. It is hard to distinguish between tendinosis and tendinitis. In some cases an ultrasound examination or MRI scan can be considered to image the subscapularis structures.

Most cases will involve tendinosis. This can be treated with eccentric strength exercises. Anti-inflammatory medication can be used for cases of tendinitis. Surgical stitching can be considered in the case of a rupture. This is often not useful for older patients, as the risk of relapse following a rupture is too high.