Anterior ankle impingement
Wedging in the front of the ankle joint

Anterior ankle impingement is a wedging at the front of the ankle joint. This usually means that something is wedged in the ankle during movement. This can be soft tissue or a bone protrusion (osteophyte). 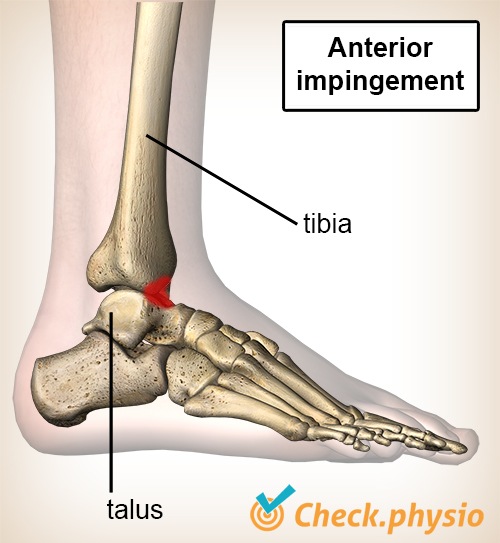 A bony impingement can be the result of ankle instability, or an injury to the ankle joint where a forceful movement was made in the direction of the toes towards the lower leg. Repeated exertion of force at the same place can lead to microtrauma of the joint surface. This means that the joint surface is repeatedly subjected to cases of minor damage.

The body will try to strengthen the damaged area by producing extra bone tissue (also called osteophyte formation). The resulting bone protrusion can become wedged. An osteophyte usually grows over time and can eventually break off. If it is broken off, the bone fragment will remain floating in the joint capsule, causing wedging of the joint.

A soft tissue impingement usually occurs after an ankle sprain in which the sole of the foot turns inwards. This is called an inversion trauma. Repeated spraining can damage the joint capsule. The resulting thickening of the capsule and possible scar tissue can also become wedged in the ankle joint.

The diagnosis of an anterior ankle impingement is made on the basis of the patient's story, looking at the history of ankle injuries and activities. After that, a physical examination will take place to get a clear indication of the symptoms.

If a bony impingement is suspected, an X-ray may be taken to see if osteophytes are forming, and if so, to what extent. The X-ray can determine the size of the bone spur and whether a bone fragment has broken off.

Initially, soft tissue impingement is treated with rest, physiotherapy, a brace and shoe adjustments. An injection is used if other therapies do not work sufficiently.

Following an ankle trauma (e.g. a sprain or misstep), appropriate physiotherapy is important. The ankle can be trained and the ankle joint mobilised. This is particularly important if a serious sprain has displaced the ankle bone. This displacement can put pressure on the capsule at the front of the ankle, which can later on cause impingement symptoms because the capsule becomes irritated and thickened.

A brace may be recommended if ankle sprains happen regularly during (sports) activities.

If there are problems with the position of the foot, an orthotic may be a good solution. It is therefore important that the ankle joint, the foot and the entire lower leg are examined. Based on the findings, a treatment programme will be started. Repeated sprains increase the risk of anterior ankle impingement, so it is important to have the foot and ankle examined at an early stage.

If a bony impingement is suspected, it may be decided to perform surgery to remove the bone spur after an X-ray. Any bone fragments that broke off should also be surgically removed. 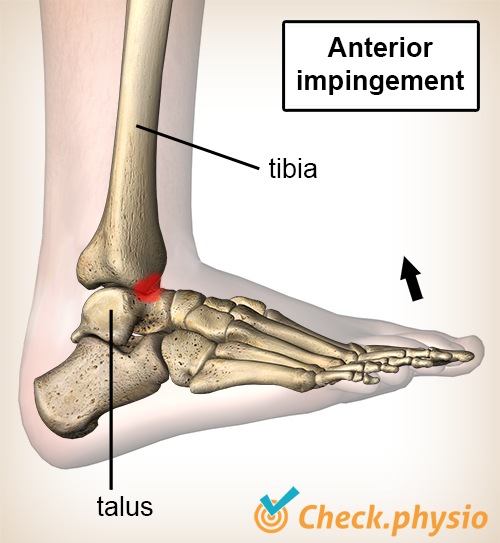