A pulmonary embolism is a blockage of a pulmonary artery, usually caused by a blood clot. This has negative effects on the oxygen uptake in the lung and causes shortness of breath. 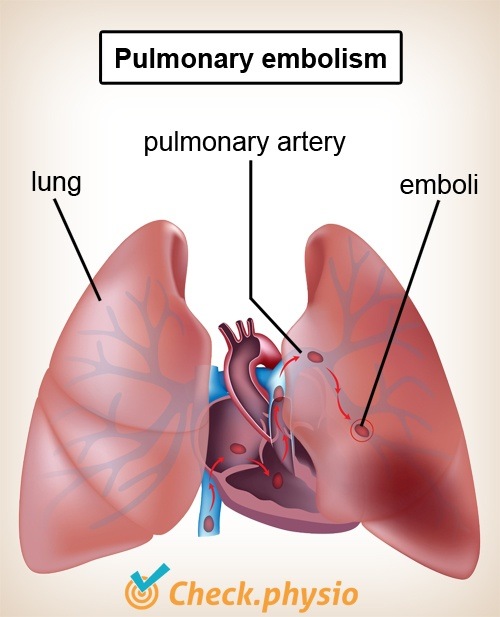 As the symptoms can vary significantly in severity, the diagnosis is often missed.

An embolism is a blockage of a vein or artery. Usually this is caused by a blood clot formed at one location that blocks a blood vessel at another location. In addition, the blockage can - in exceptional cases - be caused by an air bubble (when piercing a blood vessel), or by other forms of blockage.

A pulmonary embolism usually occurs when a blood clot forms in one of the large veins in the thigh or pelvis (thrombosis). This clot can dislodge and enter the lungs via the circulation.

Risk factors for developing a pulmonary embolism include:

The symptoms can vary significantly in severity. Possible symptoms include:

If the blood clot is very large, it can block the access to the lungs in a fatal manner. However, this is very rare.

The doctor will estimate the symptoms and assess whether these may be caused by a pulmonary embolism.

If there is a relatively high risk of pulmonary embolism, the patient will be referred for a CT scan. Contrast fluid will be injected into the circulation, making the pulmonary arteries and their branches visible. If all the branches are clearly visible, then a pulmonary embolism can be ruled out.

If the risk of a pulmonary embolism is deemed low, then a blood test will first be performed. Based on the result of this blood test, the decision can be made to perform a CT scan after all.

The patient will receive anticoagulants to prevent expansion of the existing clots and to combat the formation of new clots. Thrombolysis can be performed in severe cases. This involves the use of powerful drugs to dissolve the clot.

You can check your symptoms using the online physiotherapy check. If you have the signs and symptoms described above you should always talk to your GP to prevent the symptoms becoming worse and to avoid serious injury.