Oarsman's wrist is a painful inflammation of the forearm that is caused by friction occurring at the site where four muscles of the forearm cross over each other. It's a common complaint amongst rowers (oarsmen). People who flex and extend the wrist frequently and forcefully are also at increased risk. 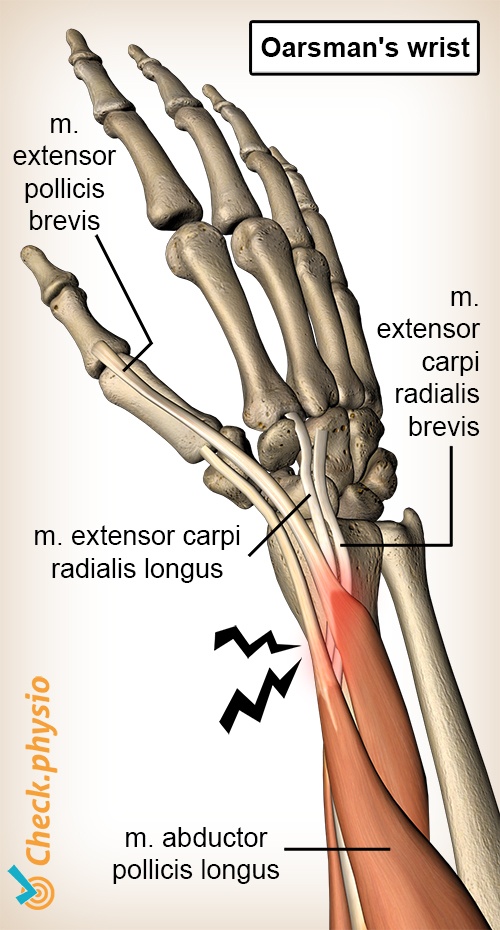 The presentation of oarsman's wrist is very similar to that of De Quervain's disease. Both conditions have a very similar pain location and are difficult to distinguish from each other.

Two extensor muscles of the wrist cross two extensor muscles of the thumb at a site approximately four to six centimetres above the wrist joint in the direction of the elbow. The tendons of these muscles are positioned close to each other. Each tendon is covered by a slippery sheath, which ensures that the tendons glide over one another easily. In the case of oarsman's wrist, we suspect that this covering - also referred to as the 'tendon sheath' - is inflamed.

Repeated forceful flexing and extending of the wrist is considered to be one of the causes. As a result, people who row, lift weights, do gymnastics or play a racket sport have an increased risk of developing oarsman's wrist.

The first steps that need to be taken are to determine the cause and to prevent overuse. Relative rest will alleviate the symptoms in most cases. If the symptoms do not disappear, there are a number of options: